Once part of South Riverdale, the community of Leslieville has emerged as one of Toronto’s hippest places with trendy bars, vintage furniture shops and restaurants that are mostly all independently owned and operated.

​Leslieville’s boundaries are the Don River to west,  Coxwell Avenue to the east, the Canadian National railway tracks from Gerrard Street to the north and Eastern Avenue to the south.

​Seniors may be eligible for an Accessibility Parking Permit through the City of Toronto.  Inquire at 416 235-2999.

Since 1980, the Ralph Thornton Centre (at 765 Queen Street East) has been offering programs ranging from Arts, Mediation, Education, Social Wellbeing and Cooking.  The Centre’s namesake, Ralph Thornton, was a taxi driver and Riverdale community activist.  416-392-6810.

​Jimmie Simpson Recreation Centre (at 870 Queen Street East) is a hub for free recreation programming with tennis and basketball courts, an indoor pool and offers adult courses like Cardio Dance, Yoga and Palates as well as Muscle Conditioning classes for older adults.  416 392-0751.

Riverdale Park East, on Broadview south of the Danforth, is one of Toronto’s largest parks and has a swimming pool, rink, tennis courts, sports fields, walking/running track and access to the Don Valley Ravine with walking and biking trail along the Don River.   It offers stunning cityscape views.

The community began as a small village in the 1850s, which grew up around the Toronto Nurseries owned by George Leslie & Sons.  Many of Leslieville’s original residents were gardeners who worked for the nurseries or were employed by one of the many factories in the area.

For many years, Eastern Avenue was home to multiple lighting and metal processing plants but since the departure in the last two decades, the area has undergone significant gentrification as the reduction in air pollution has made it much more appealing to young families.

The Ashbridge Estate on Queen Street west of Coxwell Avenue,is the earliest known home in east Toronto area.  It was settled by Sarah Ashbridge, a widow from Pennsylvania, whose family came owned 600 acres in this area.  The property was subdivided and sold throughout the years and by 1920s had shrank to two acres.  The family remained on the property until 1997 and they became the only family in Toronto’s history to have stayed in the same property for 200+ years.

The Royal Canadian Curling Club is located at Queen St. East on Broadview Avenue.  It features six  sheets and hosts leagues for about 500 members.  The clubhouse was originally built in 1907 by the Royal Canadian Bicycle Club and the ice arena was added in 1929 and activities over the years were cycling,  skating, baseball, ice hockey, curling, and even ten-pin bowling. Since 1953, they focus exclusively on curling.

The Opera House (at 735 Queen Street East) is one of the city’s most historic performing venues that opened in 1909 as a vaudeville stage serving the primarily working-class neighbourhood. It was later turned into a cinema (La Plaza Theatre).  In the early 1990s, it became The Opera House.

The Broadview Lofts  are condos at Broadview and Eastern Avenues originally built in 1914 as the Rexall Pharmacy and Drug Distribution company warehouse. The 2003 redesign kept historic elements like the cage elevators,  rooftop water tower, floors and12′ ceilings.

Initially known as the Toronto Baseball Grounds back in 1886, Sunlight Park  was the first baseball stadium in Toronto with seating for 2,200.  Used for local baseball leagues during the 20th century, it stood west of Broadview Avenue, north of Eastern Avenue, near the Don River. The park’s name originates from the Lever Brothers Sunlight Soap Works which was built behind outfield.  The site is now for sale and is slated for redevelopment. 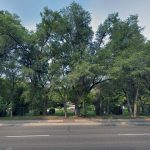