This large neighbourhood in the East York area of Toronto is very diverse in resident cultures, income levels and land uses.

The boundaries of this community are Taylor-Massey Creek to the south, Holland Avenue to the north, Victoria Park Avenue to the east.

The smaller neigbourhoods included inside this community are Topham Park, Woodbine Gardens and Parkview Hills.

Wardenis the nearest TTC stations, along the Bloor Danforth line.

Buses from there go west along O’Connor bus (route 70) to Coxwell station or up Victoria Park from Victoria Park station north (route 24).

Wheel-Trans provides door-to-door accessible transit service for persons with physical disabilities using accessible buses, contracted accessible and sedan taxis.  Their strict eligibility guidelines can be discussed via appointment by calling 416-393-4111.  Once eligibility is confirmed, reservations are at 416-393-4222. Toronto Ride provides door-to-door, assisted transportation to seniors 55+ and adults with disabilities who are not eligible for Wheel-Trans. This partnership of 14 not-for-profit agencies in Toronto can be reached at 416-481-5250. Seniors may be eligible for an Accessibility Parking Permit through the City of Toronto.  Inquire at 416 235-2999. Non-Medical transportation for seniors can also be arranged with accompaniment through your local Home Instead office.

O’Connor Community Centre (at 1386 Victoria Park Avenue and O’Connor) recently re-opened, and has a free gym, weight room and outdoor pool.  They offer special programs for adults 60+ like Line Dancing (country, latin and sequence – partners not required), Visual Arts (drawing, painting, and pottery), and Cardio Fitness.  Plus they have a Drop in Social Time for Adults 55+.  416 395-7957.

Taylor Creek Park follows a major tributary to the Forks of the Don River. Three rivers meet at the forks and form the Lower Don River: the East Don, the West Don and this tributary. Known by several names over the years (Taylor Creek, Massey Creek and Silver Creek), its mature forests, scrub communities and marsh habitat support a diversity of wildlife and regionally rare plants make it ideal for hiking, walking, off-road cycling and snowshoeing.   Vehicles can enter Taylor Creek Park at Don Mills Road, Haldon Avenue or Dawes Road. There is also an off-lease dog area.

Warden Woods (the north entrance is located at St. Clair Avenue East and Warden Avenue) is a thickly forested valley following Massey Creek east of Pharmacy Avenue to St. Clair Avenue East.   The valley’s contour has been shaped by the erosion of Massey Creek through the Halton glacial till plain (Toronto’s last glacial deposit) and through several underlying glacial deposits. It is known for hiking, walking, off-road cycling and snowshoeing.

The nearest hospital is Toronto East General Hospital (located at 825 Coxwell Avenue and Sammon Avenue) has an emergency department.  416 461-8272.

Another nearby hospital is Sunnybrook Hospital (at 2075 Bayview Avenue north of Lawrence) also has an emergency department.  416 480-6100.

Bridgepoint Active Health is located at 14 St. Mathews Road (off Broadview Avenue just north of Gerrard Street).  The newly renovated hospital has been internationally recognized for dedication to getting patients and their families living with complex health conditions back to their lives. Bridgepoint is the single largest organization in Canada to focus exclusively on research, care and teaching for people with complex health conditions.  416-416-8252

Primacy Scarborough Golden Mile walk-in Clinic (at 1880 Eglinton Avenue and Victoria Park, in the Golden Mile plaza) is near No Frills.  416) 285-7575

The Township of East York incorporated itself January 1 1924 after local residents voted overwhelmingly in favor of the split, having felt neglected by York Township’s municipal services. It became part of the Toronto mega-city in 1998.

East York’s population (as of 2006 census) was 112,054.  It has, over the years been a residential enclave for senior citizens, but as the original owners from the 1940s age and younger families move out to suburbs to live in larger houses, this is changing.  Since the 1970s, the population composition has changed from predominantly British, as East York has become a major arrival point for immigrants, many of whom have established their first Canadian residence in the apartments that became plentiful in Thorncliffe Park, Crescent Town and elsewhere on or near main streets. As of 2001, nearly half of the population was foreign-born.

For many years, the borough did not allow the serving of alcoholic beverages in any restaurant until the 1970s, when prohibition was eliminated.

Bermondsey Road is named after a borough in London, England.  One of the first firms in the O’Connor industrial park was Peek Frean’s Biscuit Company and this was where their company’s head office were located. 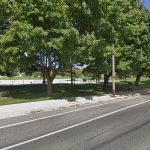 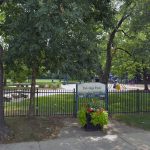