Riverdale‘s boundaries are the Don River to the west, Jones to the east, the Danforth to the north and Lake Ontario to the south.

This dense urban neighbourhood is a mosaic of multiculturalism with many neighbourhoods visible along its major arteries.  North Riverdale on the Danforth,  is well known for its large Greek population and concentration of Greek Restaurants and shops, while Gerrard Street East and parts of Broadview Avenue are home to a variety of Asian shops now commonly known as Chinatown East.  The southern part is known as the Studio District where several large corporate film studios extend from Queen East to the Lakeshore.  Trendy Leslieville has become an arts hub, with many artists choosing to run their studios from the various work-live lofts.

Riverside is a small neighbourhood within South Riverdale. Boundaries are the Don River to the west, Gerrard St. East to the north, Empire Avenue to the east and Eastern Avenue to the south.   It is  a mixed income and largely multicultural neighbourhood currently experiencing a trend of gentrification along Queen St. East and Broadview Ave and is becoming a district for independent design, furniture, and food retailers, as well as restaurants.

Broadview and Chester and PapeTTC stations are north South Riverdale (Broadview and Pape are wheelchair accessible and include east/west subway trains, north and southbound buses).

Toronto Ride provides door-to-door, assisted transportation to seniors 55+ and adults with disabilities who are not eligible for Wheel-Trans. This partnership of 14 not-for-profit agencies in Toronto can be reached at 416-481-5250. Seniors may be eligible for an Accessibility Parking Permit through the City of Toronto.  Inquire at 416 235-2999.

Frankland Community Centre & Pool (at  816 Logan Ave, south of the Danforth) is a smaller facility located in Frankland School. 416-392-0749

Riverdale Park East, which is located south of the Danforth, is one of Toronto’s largest parks and has a swimming pool, rink, tennis courts, sports field, walking/running track, an ice rink, sports fields and access to the Don Valley Ravine with walking and biking trail along the Don River.   It also offers stunning views of the city scape and any local resident would tell you it’s the winter tobogganing and outdoor arena that makes it the best park in the winter.

Withrow Park is a 8.5-hectare park with an ice rink, wading pool, tennis courts, ball diamonds, volleyball courts, sports fields, and a leash-free area.  It was  created in the 1910’s  and is among Toronto’s large multi-purpose parks. The park goes from Logan Avenue to the West,  Carlaw Avenue to the east, Bain Avenue on the south and nd McConnell Avenue on the north. It hosts a weekly farmer’s market.

Jimmie Simpson Recreation Centre is a large facility located at Jimmie Simpson Park at 870 Queen Street east.  It is a hub  is a hub for free recreation programming with tennis and basketball courts, a swimming pool and offers adult courses like Cardio Dance, Yoga and Palates as well as Muscle Conditioning classes for older adults focusing on building bone mass, muscular strength and endurance with no cardio component.  416 392-0751

Bridgepoint Active Health (at 14 St. Mathews Road, at Broadview Avenue and Gerrard Street) is the newly renovated hospital and single largest organization in Canada to focus exclusively on research, care and teaching for people with complex health conditions.  Called “House of Refuge” in 1860,and used for vagrants, the dissolute, the mentally challenged and renamed “Riverdale Isolation Hospital”in 1875, during the smallpox epidemic.  416-416-8252.

Albany Medical Clinic is located at 807 Broadview Ave (at Pretoria) 416-461-9471 and offers a walk in clinic, physiotherapy and medical diagnostics.

Toronto’s largest bridge, the Prince Edward Viaduct was built in 1918 and provided Riverdale with an important link to the City of Toronto.

Danforth Avenue was named after Asa Danforth, an American contractor  commissioned in 1799 to cut the Danforth but didn’t actually build it.

The Royal Canadian Curling Club is located at Queen St. East on Broadview Avenue was originally built in 1907 by the Royal Canadian Bicycle Club.  .  Since 1953, they’ve focused exclusively on curling and feature six  sheets and hosts leagues for about 500 members. 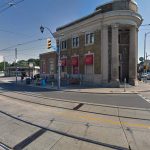 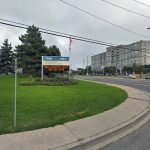